Into the middle of the 1800s Gaelic-speaking communities generally emigrated and settled together. The earliest of these migrations to North America began in the 1730s, when groups went to Georgia, New York state, and the Carolinas. Highland soldiers who had fought in the Seven Years' War (1756-1763) were awarded with land grants in Quebec and New York state, creating magnets for chain migration. As conditions in the Highlands grew increasingly oppressive in the 1770s, emigration, especially to the Carolinas, accelerated. After the American Revolutionary War, however, most migration was redirected to Canada.

It was estimated by churchmen in the late nineteenth century that 250,000 people in Canada spoke Gaelic. They could be found in many different regions, including Nova Scotia, Prince Edward Island, the Codroy Valley of Newfoundland, New Brunswick, the Eastern Townships of Quebec, Glengarry County in Ontario, Bruce County in Ontario, Vancouver, and Winnipeg.

Gaelic scholar Jonathan Dembling has stated that in this period "Gaelic was truly a Canadian language", adding that it was the "largest non-official language at the time of Confederation (1867)", that is, only behind English and French in the number of speakers.

The surviving Gaelic poetry of emigrants and their descendents have left vivid impressions and comments about their experiences, challenges, and accomplishments. A selection of these was edited by Sister Margaret MacDonell, former chair of the Department of Celtic Studies, in the volume The Emigrant Experience (University of Toronto Press, 1982).

As in Scotland, however, Gaelic was subjected to neglect and hostility in Canada. It has survived to the present as a community language only in Nova Scotia. 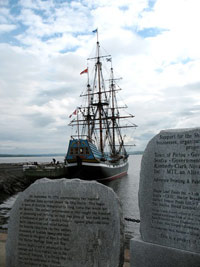 The ship Hector arrived in Pictou in 1773, carrying some 189 people who established a Highland community in Pictou County. Many of the first books published in Gaelic in Canada produced in Pictou, such as the Gaelic hymnal Laoidhean Spioradail in 1832 and Companach an Òganaich in 1836. Amongst those settled in eastern mainland Nova Scotia and Cape Breton were accomplished Gaelic scholars, poets, 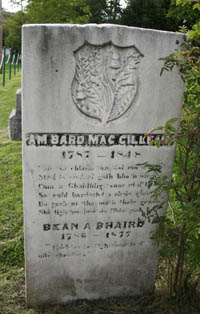 clergymen, and musicians. A few of these have received renewed attention.

The most celebrated of Gaelic poets to have emigrated to North America was Iain MacGilleathain (aka 'John MacLean', Am Bard MacGilleathain). Born in Tiree in 1787, he was poet to the Lord of Coll until he came to Barney's River (Pictou Country) in 1819, bringing important manuscripts of Gaelic poetry with him. In 1829 he and his family moved to Antigonish County; their settlement is now called Gleann a' Bhaird (Glenbard) in his memory. He composed an enormous amount of verse in both Scotland and Nova Scotia, and a volume of his work is currently being edited by Dr. Rob Dunbar.

Iain MacGilleBhràth ('Am Pìobaire Mór') was born in Moidart, Scotland, c. 1792 and was a professional piper and poet to MacDonald of Glenaladale. He emigrated in 1818, initially to Prince Edward Island but later to Antigonish. Although he was said to have composed many poems, only a few have been found and identified.

Alasdair Ailein MacDhomhnaill was born in Glenuig, Scotland, in 1820 and emigrated with his family to Keppoch, Antigonish County, in 1830. What remains of his output has been edited by St FX Librarian Laurinda Matheson and her husband Trueman in the volume O Cheapaich nan Craobh (Sìol, 2008).

Ailean 'the Ridge' MacDhomhnaill was born in Brae Lochaber, Scotland, in 1794 to a branch of the MacDonalds of Keppoch with a strong poetic tradition. He emigrated to Cape Breton with his family in 1816, and relocated again to Upper South River in Antigonish County in 1847. His poetry has been edited by department associate Effie Rankin in the volume Às a' Bhràighe (CBU Press, 2004). 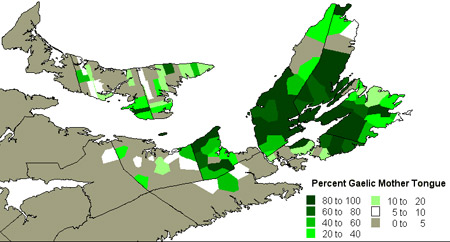 Most emigration to Cape Breton occurred between 1802 and 1843; Jonathan MacKinnon (editor of the all-Gaelic newspaper Mac-Talla) estimated that 25,000 Gaelic emigrants settled in Cape Breton and over 50,000 Gaelic speakers are believed to have lived on the island in the middle of the century. A survey of the poetic remains of Cape Breton identified 170 Gaelic poets from printed sources alone, and many more are known to have existed. This is a testimony to the resilience of Gaelic in immigrant communities and the importance of Gaelic oral tradition to them.

Some Milestones of Scottish Gaelic Publishing in N America