"Celtic" is a branch of the Indo-European language family, like English (which is part of the Germanic language family). The means by which the Celtic languages became established in Europe, and the time period in which this occurred in various regions, is currently a matter of research and speculation. The earliest linguistic evidence dates back to around the 6th century BCE in the form of Lepontic inscriptions, found in northern Italy.

There are four Continental Celtic languages: Lepontic, Celtiberian, Galatian, and Gaulish. These languages became extinct in the first few centuries after the Roman conquest, although they have left traces in languages such as German, French and English. Most of our information about these languages consists of short inscriptions, including Gaulish written on cursing tablets and spindle whorls, the Celtiberian Bronze of Botorrita, Lepontic inscriptions on stone, and bilingual inscriptions in Latin or Greek and Gaulish. 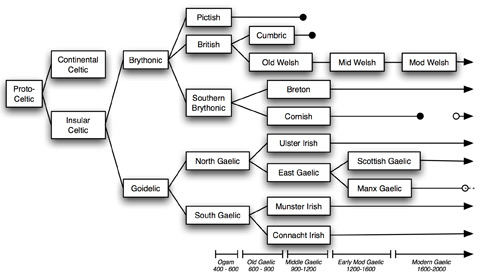 The Insular Celtic languages, that is to say, the Celtic languages of Ireland, Britain and Brittany are traditionally grouped into two main branches, Goidelic ("Q-Celtic") and Brythonic (or British) ("P-Celtic"), because of a phonetic divergence that is thought to have developed in very ancient times, which developed into a q or p respectively (this explains for example why the word for 'son, boy' is macc in Old Gaelic, but mab in Middle Welsh). The Goidelic branch eventually split into three different languages in the medieval period: Irish Gaelic, Scottish Gaelic, and Manx Gaelic.

A Short History of (Scottish) Gaelic

It is still unclear when the Celtic languages arrived in the British Isles or how. At the time of the Roman occupation, the territories now claimed by the modern nation we call "Scotland" was inhabited by people speaking forms of Goidelic and Brythonic languages. It is only due to the Roman presence that divisions emerged in the Brythonic branch which led to the use of the labels "Pict" and "Briton." It is similarly unclear when Celtic languages arrived in Ireland; estimations vary from around 1000 BCE to around 100 CE.

By about the 12th century, Brythonic speakers on the mainland had adopted the Gaelic language, although Brythonic influences were imprinted on Scottish Gaelic. Similarly, the Norse who settled the Western Isles and the western seaboard of the mainland had become Gaelicized.

The term Scot originally referred to a Gaelic speaker, whether s/he was living in Scotland or Ireland. The kingdom of Scotland was built and dominated by Gaelic-speaking kings, saints, churchmen, and warriors, and this label stuck to Scotland rather than Ireland. At its height in the 12th century, Gaelic was spoken in most parts of Scotland, and even south of the English border.

English-speaking peoples settled in the Lothians of south-eastern Scotland in about the 6th century. The influence of the English language expanded during the reign of David son of Malcolm Canmore when he planted burghs and military outposts in many other parts of the Lowlands of Scotland after becoming king of Scotland in 1124. David brought people from the north of England and the Low Countries of Europe to the burghs, which introduced a new social order, and language, to Scotland which soon dominated the Lowlands. The people of the Highlands, however, held on to their identity as the "Old Scots" and to their ancestral language, Gaelic.

Until the seventeenth century, Gaelic Scotland and Ireland were linked by a literary form of Gaelic, by dynastic intermarriage, and by the exchange of professional Gaelic scholars, poets, churchmen, lawyers, and warriors. These bonds were broken at the same time that Gaeldom in both Scotland and Ireland was besieged politically, culturally, and economically by the English-speaking world. The fortunes of the language were tied to the native nobility; when they were assimilated or exiled (during the seventeenth century in Ireland, and the eighteenth century in Scotland), Gaelic lost the crucial infrastructure and patronage it needed to ensure its development and survival.

Some Milestones of (Scottish) Gaelic Literature